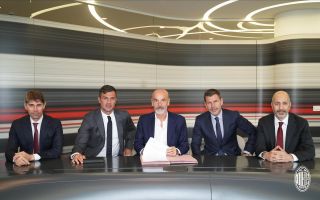 Stefano Pioli has done a fantastic job at AC Milan since he joined the club back in 2019, which happens to be two years ago on the day. This season, after seven games, the Rossoneri have an impressive 19 points.

Many questioned Milan’s decision to hire Pioli after the whole Marco Giampaolo debacle, but boy has it turned out to be the right decision. Paolo Maldini and Ricky Massara can take great pride in their stance on the matter.

Since Pioli took over the club, as you can see in the tweet below, Milan have played 97 games. In those games, the Rossoneri have been the successful side 56 times, while they have been beaten 18 times. Furthermore, there have been 23 draws.

📅 On this day in 2019, #ACMilan hired Stefano Pioli as their new head coach. What a journey it has been since…

This means that Milan have won almost 58% of the game with Pioli in charge. And they have lost just 18.5% of them. Pioli’s first months were tough but the Rossoneri have been a well-oiled machine after that.

READ MORE: Giroud has made a full recovery and could start vs. Hellas Verona