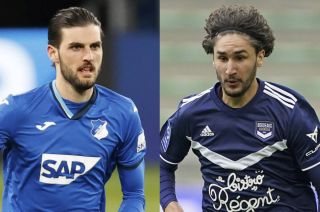 AC Milan are interested in signing Florian Grillitsch from Hoffenheim but only as an alternative to their main target, a report claims.

German outlet Kicker reported this morning that a new target is in the sights of the management as Grillitsch has entered their radar and is ‘very popular’ with Paolo Maldini and co., with the hunt for a central midfielder firmly underway.

The player would approve to as a move to a Champions League club would fit in with the next step sought by the 26-year-old. While Napoli came forward in recent weeks, the Diavolo are better placed to pay a fee for him this summer, somewhere in the low double-digit million mark (€10-12m).

According to the latest from Daniele Longo of Calciomercato.com, Grillitsch is a profile that Milan like but at the moment he is considered an alternative to Yacine Adli of Bordeaux, who several sources are reporting is closing in on a move to the Diavolo.