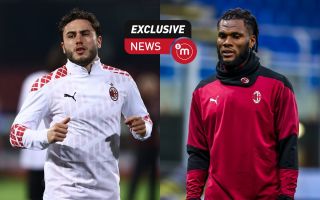 The situation concerning both Gigio Donnarumma and Hakan Calhanoglu has been tough for Milan, yet to reach an agreement with the duo. Therefore, they are even more determined to avoid similar situations in the future.

In addition to captain Alessio Romagnoli (read about him here), Davide Calabria and Franck Kessie will expire in the summer of 2022. Speaking on our podcast, Fabrizio Romano shared some details about the duo and the renewal talks.

Do you think that we will start talks or have we started talks already for Kessie and Calabria?

“Yes, with these two players negotiation have started, but it’s not talks like they are in the details but they are just talking with the agent and the player to say that we want you in the future, and we want to talk with you about a new contract.

“So they are not in the details with the new salary or anything, but they have started to open negotiations with these players and let’s see in the coming weeks and months what will happen.

“And of course, for Kessie, they are so happy and many clubs wanted him even when he wasn’t performing with Milan. The board have always defended this player, they always wanted him to stay. One year ago Inter wanted him, Conte is a big fan of him, but Milan always said no chance. So for sure, they will negotiate with him for a new contract.

“And about Calabria, I think the pitch is speaking for him because his season has been amazing, so for sure they will negotiate for a new contract. He had some chances in Spain, because a lot of Spanish clubs appreciate him. He’s happy with Milan, he’s in love with the club, he was born in the club. So it’s normal also for him to stay and negotiate a new contract.”

READ MORE: Mihajlovic makes bold claim after Milan loss: “If we had Ibra it would have ended 3-0”