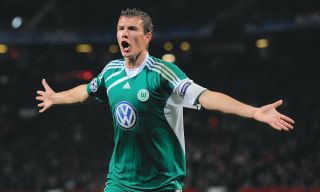 This weekend’s derby between AC Milan and Inter will see Edin Dzeko face off against the Rossoneri but it could have ended up being the other way around, a report claims.

Today’s edition of La Gazzetta dello Sport (via Calciomercato.com) recalls when Adriano Galliani was the CEO of Milan and he flew to Sarajevo to get Dzeko to sign sign a contract that would make him a Milan player. Dzeko and Milan had promised each other that they would join forced but the deal collapsed because his club at the time Wolfsburg took a step back after unexpectedly winning the Bundesliga title.

The Bosnian therefore could have been the protagonist of the Milan derby but in red and black rather than blue and black. Galliani really believed in him, so much so that he wrote him a personal letter to convince him to accept the move.

The contents of the letter – sent together with a Ronaldinho Milan shirt – were a way to show the Rossoneri’s intentions to join Edin with the former Ballon d’Or winner and included the following pledge: “This summer I will do everything to bring you to Milan.”

He left for Sarajevo and remained for three days in a hotel waiting for Dzeko’s yes. At a time when Milan needed a top striker, the fact the deal fell apart remains a regret from the Berlusconi era.