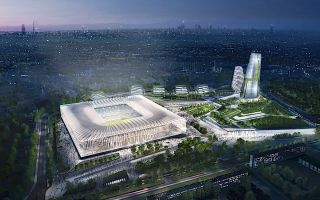 GdS: The amount Milan and Inter should earn in revenue from new stadium after 2027

AC Milan and Inter should be able to net a huge boost in revenues if and when they move into a new stadium in a few years time, a report claims.

This morning’s edition of La Gazzetta dello Sport (via Calciomercato.com) reports that the Cathedral will be the winning design, the one created by American studio Populous, inspired by the Duomo and the Galleria Vittorio Emanuele II. The Nerazzurri and Rossoneri have entrusted the construction of the new stadium to them and hope for it to be open in 2027.

There is a capacity of almost 80,000 spectators at the current Giuseppe Meazza stadium but it will go down to a maximum of 65,000 at the new stadium. There will be more executive seats than today to increase earnings and it is estimated that from 2027 Inter and Milan will be able to derive at least €80m each year from the stadium.

READ MORE: Milan and Inter want Benfica striker but €80m clause has priced them out