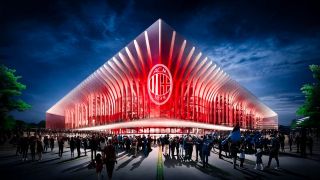 GdS: Milan and Inter will soon announce winning stadium design – all the details including capacity

AC Milan and Inter appear to have chosen the winning design for their new stadium and have targeted a date for opening too, a report claims.

This morning’s edition of La Gazzetta dello Sport (via MilanNews) writes that the new project will be entrusted to the American company ‘Populous’ whose design is inspired by the Duomo and Galleria Vittorio Emanuele II. The new stadium will hopefully be open in 2027, about a year after the opening ceremony of the Winter Olympic Games which will take place in San Siro.

The two leading figures of the project in Milan president Paolo Scaroni and Inter CEO Alessandro Antonello have been pushing for over a year now to build a unique and modern structure that will totally transform the district in and around the current stadium in the process.

The capacity will be about 60-65,000 and the number of executive boxes will be increased to secure added revenue. It is estimated that from 2027 the two teams will be able to have profits that will be around €80m from the stadium.

It will have an eco-sustainable glass facade that will reflect the colours of the clubs on match days, and an official announcement should arrive by Christmas.

READ MORE: Kessie clouded by renewal saga – his words are coming back to haunt him