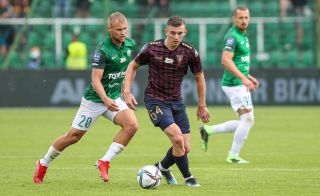 AC Milan are the latest club to take an interest in signing teenage midfielder Kacper Kozlowski from Pogon Szczecin, according to a report.

According to Calciomercato.com, the Rossoneri scouting department are watching Kozlowski closely, alerted by the fact he is already a starter in the midfield for Ekstraklasa side Pogon Szczecin and has also made his debut for the Polish national team under Paulo Sousa at 17 years and 246 days.

As per the report, the player is described as a mix between Pogba and De Bruyne as he can play as both a box-to-box midfielder or a more advanced creative type. His debut with Pogon in the Ekstraklasa came at 15 years and 215 days, against Wisla Krakow.

He chose to stay in Poland for the season ahead and to say no to Bayer Leverkusen to play in the first team continuously, but next year it will be different as Juventus, Red Bull Salzburg, Dortmund, RB Leipzig and Milan are all keen.

He is not exactly characterised for being down to earth either, recently remarking: “Why should I pretend? There are footballers who declare themselves humble and then they are not. They pretend. I don’t like to pretend.

“I’m not a humble person, it’s right that you know. I tell the older players to pass me the ball if they don’t know what to do? It seems fair to me. I always know what to do.”