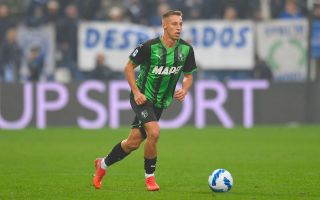 Report: Milan, Juventus and Napoli have taken an interest in 22-year-old Sassuolo midfielder

AC Milan are one of the clubs who have taken an interest in young Sassuolo midfielder Davide Frattesi, it is reported.

The 22-year-old is having a fantastic season with Sassuolo having already amassed 3 goals in 13 appearances in the current Serie A season. He only joined back in June from Monza but has already attracted the attention of several top Italian clubs thanks to his impressive performances.

Calciomercato.it recalls how Frattesi has been in the headlines recently as he received a disqualification after having uttered a blasphemous expression in the 9th minute of the second half of Sassuolo’s most recent game, but it shouldn’t put suitors off.

The report notes how journalist Fabio Santini told 7 Gold that Frattesi has inevitably ended up in the crosshairs of the big Serie A clubs and could therefore leave Sassuolo. From Napoli and Milan to Juventus, it seems everyone is keeping an eye on the Italy U21 international and his development.