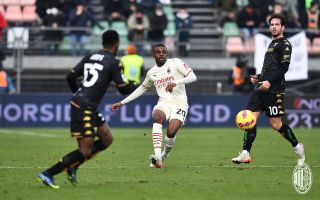 AC Milan are fully reaping the rewards of their exceptional scouting department discovery as Pierre Kalulu continues to go from strength to strength.

Calciomercato.com writes how the 21-year-old Frenchman has always shown a willingness to play wherever he is needed and this season he has already been fielded as a right-back, a left-back and most recently as a centre-back alongside Matteo Gabbia. He has 18 appearances for the season, with 5 of these in the Champions League and 36 in total since he joined Milan.

Speaking after the game, Kalulu admitted that he does not have a favoured role per se but rather it depends on the opponents: “If I have to be honest it depends on the games: sometimes I feel better on the right, in others on the left or central.”

Meanwhile, Milan are enjoying his development and they are very happy with their decision to pursue him strongly year and a half ago when they overcame the fierce competition of Bayern Munich to land him from Lyon. How did they do it? They convinced Kalulu he will get good playing time despite zero minutes as a professional.

Kalulu arrived on a free transfer with only a development fee paid to the Ligue 1 side, and he earns €600k net per season with a gross of less than €800k thanks to the Growth Decree. A low-cost bet, but a winning one.