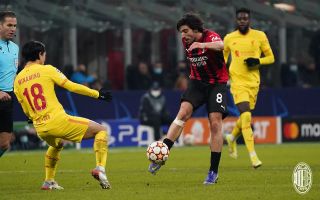 MN: The truths and realities that Milan learned during their defeat to Liverpool

The defeat against Liverpool’s second string side at San Siro in the Champions League last night taught AC Milan some harsh lessons, it is claimed.

The Rossoneri’s elimination from European competitions raises the need for some reflections and observations – just as we did in our recent feature – and MilanNews have given their take on some obvious points that emerged from the game and from the campaign as a whole,

The first is about the balance of the attacking department which continues to lean on Zlatan Ibrahimovic who, at 40 years of age, struggles to be decisive in the big games as demonstrated by the dull performances against Inter and Liverpool.

The situation is different if the Swede comes off the bench in the final 20-25 minutes where he does not think as much about managing his energy, but for now the management might be thinking about how to freshen up the forward group.

With Juventus and Inter in controlled spending mode due to their situations, Milan must take the advantage that their relative financial strength can give them and invest heavily to remain competitive and keep alive that virtuous circle from an economic point of view.

Franck Kessie’s fluctuating performances are another thing that the management will be thinking about given his demands to renew his contract. To be paid like a top player he must perform like one the vast majority of the time, so following up a man of the match performance against Atletico Madrid with one full of sloppy errors and missed chances against Liverpool does his case no favours.

The final point is one concerning Sandro Tonali and Stefano Pioli, questioning the coach’s decision to bring the midfielder off when he was the most dynamic presence in getting the ball to the attacking players. He didn’t even last an hour in the end, coming off with Brahim Diaz in the 59th minute.