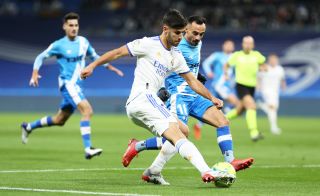 AC Milan have been named as one of the clubs that are interested in signing Marco Asensio, who could leave Real Madrid in the coming months.

According to Spanish source DiarioGol, Asensio would leave Real Madrid if Kylian Mbappé were to arrive from Paris Saint-Germain. He is already frustrated at a lack of playing time under Carlo Ancelotti and if the Frenchman arrived at the Bernabéu, he knows there would be even less space.

Asensio’s big objective at the moment is to be in a position that allows him to play a leading role for Spain in the Qatar 2022 World Cup and there is no shortage in interested teams, while the most attractive offers could come from England and Italy.

Milan and Juventus are mentioned in the article as having interest while in the Premier League it is Arsenal, Tottenham and Liverpool who are keen on the 25-year-old, who has a contract which expires in June 2023.