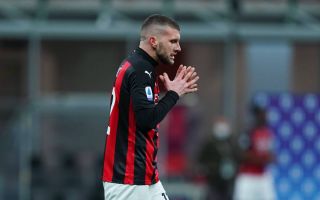 AC Milan have officially lodged an appeal against the suspension that Ante Rebic was handed earlier this week, it has been confirmed.

The Croatian was sent off by Fabrizio Pasqua for protesting against a decision and then insulting the referee. It was clear from the off that it must have been insulting and/or offensive for the referee to brandish a straight red card.

It was reported at the time that it could potentially lead to a two or three-game ban depending on what was written by the referee and evaluated by the Sports Judge, and the judge that Rebic is disqualified for two rounds in Serie A – therefore missing the matches against Fiorentina and Sampdoria.

According to MilanNews and Pietro Balzano Prota among other sources, Milan will appeal the suspension. Once they acquired the referee’s report, they decided to intervene to try reduce the suspension of the winger and recently filed the documents to start the appeal process.