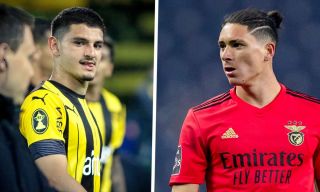 CM: Milan management to meet agent of Penarol and Benfica duo on Friday

A meeting is scheduled for Friday between the AC Milan management and the agent of two strikers the club are linked with, a journalist has claimed.

Speaking in a video on his Instagram, Daniele Longo of Calciomercato.com reported earlier this evening that Pietro Pellegri is unhappy with the amount of playing time that he has received so far and he could leave in January, with Torino pushing hard to sign him.

He also added that Milan could pursue a new young striker if Pellegri were to leave, given a deputy to the experienced Zlatan Ibrahimovic and Olivier Giroud would still be needed. According to the latest from Longo on Twitter, a Friday meeting in Milan between the Milan management and an agent is scheduled.

The agent looks after the interests of Agustin Alvarez of Penarol – who has 23 goals in 38 games this season. La Salvia also has Benfica’s 22-year-old centre-forward Darwin Nunez among his clients.

READ MORE: Milan searching for the next Tomori – Monaco, Zurich and Atalanta trio in Moncada’s sights