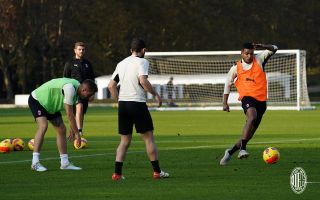 AC Milan head coach Stefano Pioli should have three players back at full fitness for the game against Fiorentina after the international break, according to a report.

Today’s edition of Tuttosport (via MilanLive) confirms that Junior Messias trained with the rest of the squad on Thursday at Milanello which essentially confirms that the Brazilian forward will be back in the fold for the visit to the Stadio Artemio Franchi a week on Sunday.

However, he is not the only player that Pioli will be able to fully count upon as Alessandro Florenzi and Tiemoué Bakayoko are also back to 100%. Both arrived on loan in August and were strongly desired by the Milan boss but have struggled with injuries to begin the season.

They will certainly be important resources from the Fiorentina game and beyond and in particular Bakayoko in January, when Milan will lose Bennacer and Kessie for the African Cup of Nations.