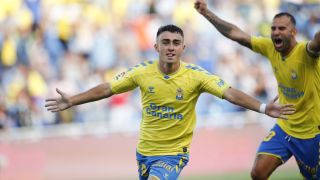 AC Milan are scouting Las Palmas midfielder Alberto Moleiro and have joined two Spanish giants in pursuit of the teenager, a report claims.

According to the latest from TDFichajes, the Rossoneri are keeping a close eye on the development of Moleiro who is developing well under the guidance of head coach Pepe Mel having made 11 appearances in the league, scoring one goal.

Both Barcelona and Atlético de Madrid have already shown interest in signing the 18-year-old and the latest to join the running is Milan, who have sent scouts on several occasions to observe the player more closely and the reports they have returned have certainly given approval.

The report adds that the plan of the Rossoneri management is to continue to follow his development for the remainder of the year and it is not ruled out that they may present an offer for next summer for the player branded the ‘next Pedri’ given he came from the same club.