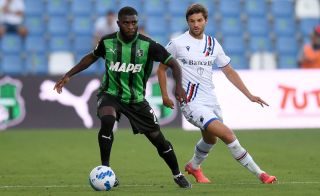 AC Milan are once again interested in signing winger Jérémie Boga from Sassuolo who could leave as early as January, according to a report.

Under Roberto De Zerbi, Boga was regarded as one of the brightest young wingers in Serie A with 98 matches in all competitions, amassing 18 goals and 10 assists. However, this season he has just 8 games and 3 assists under his belt, meaning the 24-year-old is now looking for a new adventure.

According to FootMercato, there are four clubs in Italy that are keen on Boga: Roma, Milan, Atalanta and Napoli. His contract expires in June 2023, meaning the Ivorian will probably leave next summer at the latest because the Neroverdi want to generate a transfer fee.

The four clubs mentioned are ‘very interested’ in signing him and could try to get ahead of the competition by making an offer as early as January. Atalanta are considering offering €20m in the winter, but there could be a twist as Sassuolo have not given up on the idea of ​​offering him a contract extension.