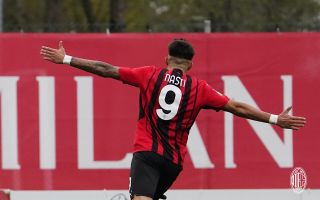 AC Milan head coach Stefano Pioli will call Primavera striker Marco Nasti up to his squad for the game against Napoli on Sunday, it is claimed.

According to what is being reported by MilanNews, Nasti will be added to the first team squad for at least the next game due to the many injuries and absences that have severely hampered the depth available to Pioli.

The 18-year-old is all set to be called up for Sunday’s match against Napoli after 5 goals in 9 games for Federico Giunti’s Primavera team this season. Given their struggles, he has been one of the few bright spots.

Milan made the trip to Udine last night with very limited forward depth again, as Rafael Leao and Pietro Pellegri are still out with muscle problems while Olivier Giroud, Ante Rebic and Davide Calabria are stuck in the treatment room. Ibrahimovic and Daniel Maldini were the only ‘forwards’ names in the squad.