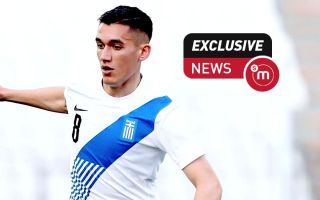 An interesting new transfer link has emerged in recent days as sources have linked AC Milan with a move for Panathinaikos midfielder Sotiris Alexandropoulos.

Calciomercato.com reported a few days ago how Paolo Maldini and Ricky Massara are monitoring the development of Alexandropoulos through scouts, as they observed the young midfielder on October 27 in a Greek Cup match against Atromitos Athens, while Greek source Sport24 also link the Rossoneri.

Who is the 19-year-old and why have Milan taken a shine to him? We spoke to Athens-based journalist Giannis Chorianopoulos of Sportime.gr who also reported that a scout has watched him in action.

Milan have been linked with Alexandropoulos in recent weeks. What is the player’s background and how quick has his rise been?

“He performed with Panathinaikos three seasons ago (2019-20), but he had many appearances last season, being a key player for the team. Unfortunately, for him, Panathinaikos – a big Greek club – are not in their best years of their history.

“But Sotiris is a player who stands out. Last season was his best and also this season is (almost) a starter for his club. He also has one appearance with the senior Greek national team.”

In your opinion, which position does he play best?

“This is one of his advantages. He can play as a ‘6’ or as an ‘8’. Whatever his manager wants. We watched him playing as a defensive midfielder or as a central midfielder carrying the ball and passing to the players who are in front of him.”

What are Alexandropoulos’ strengths and weaknesses? Is there a player you would compare him to?

“Weakness: as every player at his age (20), he must work in tactics. Also some times he loses position in the pitch. As a young player he has some empty spaces in the game, like not following the flow of a match. But this is a weakness of his age more.

“Let’s say that he reminds me of Declan Rice (style of play more when he defends) or Sevilla’s Thomas Delaney (ex-BVB) but of course we cannot compare them.”

Does he have the potential to become a top player in Europe?

“For sure. But he has to transfer to achieve that. He has to work better, harder, especially in tactics.”

Is he ready to make the jump to a club like Milan and are you surprised by the link? Are any other clubs interested?

“I think he is ready to move to a better league for sure. It was not a surprise because Panathinaikos is a big club and every player who stands out can attract, scouts, clubs etc. Yes there are 2-3 clubs who are interested in him. As for Milan’s interest our info is that for the time being, they have scouted him for two matches.”

Finally, what kind of a valuation would you say Alexandropoulos has?

“Transfermarkt value him at €1.8m, but I don’t think Panathinaikos will accept anything less than €3.4m.”