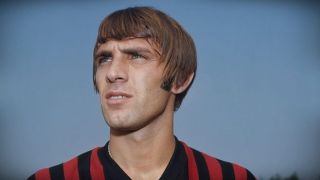 Milan pay tribute as club legend Pierino Prati dies aged 73: “You were a shining light for us all”

AC Milan have confirmed that legendary striker Pierino Prati has passed away aged 73.

Prati was a versatile and incredibly talented player who was capable of playing virtually anywhere along the front-line, being deployed as both a winger and a striker.

He was known for his pace, technique and distribution as well as his ability to score goals from distance due to his powerful shot or from close range with his fantastic movement and heading prowess.

Prati is mostly remembered for his highly successful and prolific stint under Rossoneri boss Nereo Rocco in the 60s and 70s, a spell in which he won a Serie A title, a European Cup, two Cup Winners’ Cups, an Intercontinental Cup, and two Coppa Italia titles, forming an excellent partnership with Gianni Rivera.

Milan paid tribute to a club legend with a simple but touching message on social media following the 4-1 win over Lecce.

“Goodbye to a true Rossonero legend. You were a shining light for us all and shall be dearly missed: rest in peace Piero.”

Filippo Galli expressed his condolences on Instagram, stating: “You were a champion, on and off the pitch. Your sensitivity and humility have been an example for everyone. RIP Pierino.”

Interviewed by Sky Italia, Pioli wanted to dedicate a few words of condolence to Prati.

“I want to remember him on behalf of the whole club, we dedicate this victory to him, we are close to his family,” he said (via MilanNews).

Franco Baresi, a man who played with Prati, also shared a message on Twitter: “A champion on and off the field, an honour to have known you. Goodbye Piero RIP.”

Goodbye to a true Rossonero legend. You were a shining light for us all and shall be dearly missed: rest in peace Piero. pic.twitter.com/g6e7yH7SXY