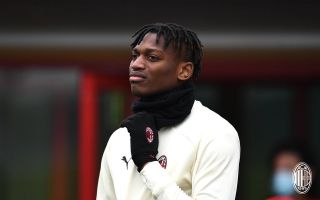 MN: Pioli recovers the ability to make choices in attack – latest ahead of Roma clash

AC Milan spent the last few weeks of 2021 battling an emergency in attack due to numerous selection problems, but they begin 2022 with hope it is behind them.

MilanNews writes how three positive updates from Milanello this week as Zlatan Ibrahimovic, Ante Rebic and Rafael Leao have in fact resumed training with the rest of the squad and therefore will be available to Stefano Pioli for Thursday’s match against Roma, with the Rossoneri looking to record a league double over Mourinho’s men.

The Swede missed the last game of the year at Empoli because of knee discomfort but it was nothing serious and he carried on training after a small break without any major problems. Leao has been out since 4 December when he suffered a muscle contusion against Salernitana, while we haven’t seen Rebic since he got a flexor issue in the derby on 7 November.

Stefano Pioli will be happy to have some depth back, and the report claims that Rebic should start from the bench against Roma while Leao battles for a starting shirt with Messias. If the Portuguese starts, Saelemakers will play on the right, while if Messias gets the nod the Belgian will be on the left. Ibrahimovic will be ahead of Brahim Diaz as the striker.

READ MORE: The Botman situation and why Milan’s owners know investment in the squad is needed