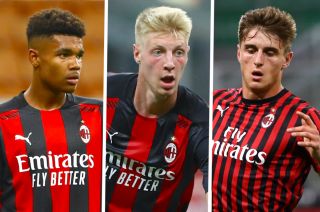 GdS: The six Primavera talents Pioli has launched and where they are now

On Thursday night in the Coppa Italia win against Genoa at San Siro, Emil Roback became the latest young talent to be used by head coach Stefano Pioli.

La Gazzetta dello Sport writes how Pioli has a reputation for spotting talent and launching those players in the right way, as seen through the likes of Cataldi, Vlahovic, Sottil, Pinamonti and many others during his times with Lazio, Fiorentina and Inter.

The first young player made to make his Milan debut under Pioli was Daniel Maldini in February 2020 against Verona, and he has since gone on to make 22 appearances for the club, with his most recent being a start in the Genoa game this week.

Then there is Lorenzo Colombo, who made his debut on 12 June 2020, playing five minutes against Juventus in the semi-final of the Coppa Italia. From there he made 11 appearances and scored a goal against Bodo/Glimt in the Europa League qualifiers before going on loan to Cremonese and now to SPAL, where he has 6 goals in 18 games.

Marco Brescianini came on for the last half hour of Milan-Cagliari 3-0 back in August 2020, therefore making his debut in the last games of the post-lockdown season. Last year he went on loan to Virtus Entella scoring 2 goals in Serie B and today he plays at Berlusconi’s Monza (with 6 appearances).

Giacomo Olzer is another who made his debut under Pioli in the Coppa Italia as he came on for a quarter of an hour in the second round against Torino last season, which Milan won 5-4 on penalties. In the summer it was sold to Brescia as part of the Tonali deal (valued at 3 million) and has not started a game for them yet, while Milan have a buy-back clause in case he explodes.

Luca Stanga is another Primavera graduate who made his debut under Pioli but he did so this season, coming on against Venezia. He can play as a full-back or a centre-back and has good technique, meaning he could be a useful wild card for the future. He ‘attends university and loves the mountains’, with Pioli a big admirer of his.

Finally, Emil Roback got a runout in the final stages of Milan-Genoa on Thursday. He is a mobile centre-forward who has 16 games and 6 goals for the Primavera. The 18-year-old arrived in 2020 for €2m from Hammarby, is inspired by Thierry Henry and prepares for games by watching his highlights.