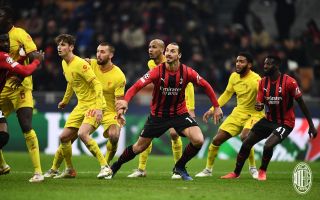 AC Milan were hoping for another magical European night to make the knockout stages of the Champions League, but it wasn’t to be as they lost to Liverpool last night, finishing fourth in the group.

Calciomercato.com reports that Milan’s transfer plans have now had to adapt as the €20m extra that would have arrived through qualifying for the round of 16 have vanished. Maldini and Massara are already working to reinforce Pioli’s squad to continue fighting on the other two remaining goals: the Scudetto and the Coppa Italia.

After Simon Kjaer’s season-ending injury the priority is definitely to go get a defender but they may now consider making a less expensive investment in January then spending a bit more in the summer transfer window.

The other reinforcement in January could be a forward as Zlatan Ibrahimovic cannot do it all alone at 40 while the 35-year-old Olivier Giroud and the injury-prone Pietro Pellegri have not had the desired impact so far.

Pioli tried to give Pellegri a chance as a starter against Salernitana, but after a quarter of an hour he was forced to go out due to an adductor problem, so he could have his loan ended earlier in January. The idea is to replace him with a low-cost reinforcement to have a ‘more ready’ alternative to Ibra and Giroud.

Then in June when the summer mercato opens – just like with the defensive signing – the management can go hunting for a top striker.

READ MORE: Spurs and Real Madrid circle for Milan star but PSG are ready to triple his salary