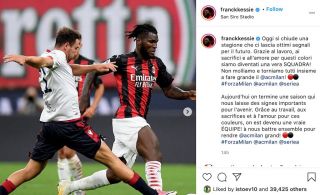 Milan players react to win over Cagliari on social media: “We have become a real team!”

Milan finished the season in the best way possible, beating Cagliari comfortably at the San Siro with a 3-0 scoreline.

Although they didn’t reach fifth place, Stefano Pioli and his men deserve a lot of praise. The Rossoneri took the lead early on through an own-goal, after Rafael Leao managed to beat his opponent on the left flank.

Zlatan Ibrahimovic missed a penalty just before half-time but got his revenge in the second half, sending a rocket past the goalkeeper to double Milan’s lead. Samu Castillejo then killed the game with the third goal, assisted by Jack Bonaventura.

Below are the reactions of the Milan players on social media…

Gianluigi Donnarumma: “A great end for the team 💪🏼 Too bad we didn’t live it as close as we would have liked but we know that, even from afar, you have always been with us. Thank you!”

Franck Kessie: “Today ends a season that leaves us excellent signs for the future. Thanks to the work, the sacrifices and the love for these colours we have become a real team! Let’s not give up and let’s get back together to make Milan great!”

Ismael Bennacer: “3-0 victory, we end the season on a good note.”

Rafael Leao: “I finish my first season in this great club with a win, we will do more next season.”

Marco Brescianini: “This evening my dream came true, making my Serie A debut with this glorious shirt. I thank @acmilan and all the people who have been close to me throughout my journey.”

Samu Castillejo: “It couldn’t have ended better guys💪🏻👏🏻 Happy for the goal. Let’s charge the batteries🔋 to get off to a good start next season.”