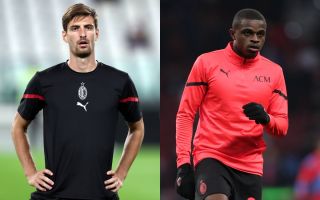 AC Milan will take on Roma this evening and they will do so with Matteo Gabbia and Pierre Kalulu as the centre-back pairing. Indeed, the recent Covid cases have forced Stefano Pioli to make some changes.

Of course, both players have played this season and they aren’t considered that inexperienced. They haven’t played together as the centre-back pairing before, though, which will make tonight’s clash very interesting.

It should also be noted that, while he has played there before, Kalulu has performed better as a right-back for the Rossoneri. It’s a big opportunity for the youngster to show off, that’s for sure, but it will also be tough.

This season, the two have been on the pitch at the same time in three games: Venezia (1-0 win), Fiorentina (3-4 loss) and Genoa (3-0 win). Kalulu played as a right-back in these and Gabbia played in the centre. In short, two rather convincing performances and one very poor.