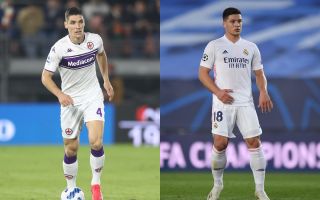 AC Milan are destined to bring in a centre-back in January as a result of Simon Kjaer’s injury. In addition, it’s possible they could sign a player for the attack as Pietro Pellegri sustained an injury yesterday.

The young Italian got injured very early in the first half and Stefano Pioli had no choice but to replace him with Rade Krunic. He wanted to rest Zlatan Ibrahimovic (ahead of Liverpool) and thus the Bosnian was the only option.

According to today’s edition of Gazzetta Dello Sport, as cited by MilanNews, Milan are scanning the market for opportunities. For the defence, they have set their sights on Nikola Milenkovic and Luiz Felipe.

The former seems to be the favourite, also because Pioli coached him while he was at Fiorentina. That being said, it’s uncertain if the Tuscan side will allow their star centre-back to leave in January instead of the summer.

Up front, the name of Luka Jovic has reappeared as he still isn’t getting any space at Real Madrid (although he scored yesterday). Milan could bring him in on loan or at a very low cost, or at least that’s what they hope.