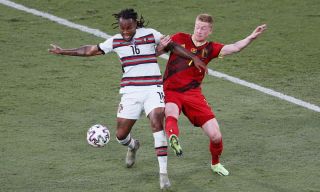 AC Milan are interested in signing Renato Sanches from Lille and have held talks with his agent Jorge Mendes, according to a report.

Renato Sanches has been repeatedly linked with a move to Milan in the past, such as when he first burst onto the scene at Benfica and when he ended up moving to Swansea City on loan from Bayern Munich, and his name has now returned to the Rossoneri’s orbit as he continues to play a starring role at Lille.

According to Calciomercato.com, Milan are still interested in signing the Portugal international as they know they will need to make an investment to find the heir of Franck Kessie, who is destined to leave on a free transfer.

Despite this, Lille are continuing to ask for a big sum for Sanches, despite the fact his contract deadline is June 2023. They are asking for figures considered too high by Milan today, but with some mediation between the parties they could hit a breakthrough.

The Rossoneri’s strategy is to try and convince the player first and then Lille. A meeting that will soon take place between Paolo Maldini, Ricky Massara and agent Jorge Mendes. It could be propitiatory to negotiate the extension of Rafael Leao’s contract but it also gives Milan a chance to really discuss Renato.

READ MORE: Ibrahimovic’s Milan journey far from over as renewal is currently likely – the situation