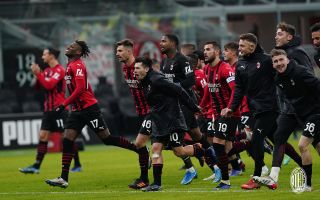 After finishing 2021 off with a shaky run, Milan faced Roma in their opening game of the new year with the hopes of getting all three points and putting some pressure on Inter at the top.

Pioli had some problems with the selection before the game as three players in the team were forced out due to Covid-19, namely Calabria, Tomori and Romagnoli. This forced the coach to play Kalulu and Gabbia as a centre-back pairing with Florezni on the right side of the defence.

Milan managed to pick up two goals fairly early on through a penalty kick converted by Olivier Giroud in the 8th minute and then Messias netting a rebound to double the lead in the 17th, but Tammy Abraham halved the deficit.

In the second half, Milan looked like the more dominant side once again and had little to no trouble with the opposition, managing to score a third goal through Rafael Leao and seal the win which came in between two red cards for the Giallorossi. Here are five things we learned…

Mike Maignan was a vital part of Milan’s win as he made several crucial saves in the 20 or so minutes in the first half that Roma were pushing to get back into the game. The Frenchman was extraordinary between the sticks and his reflexes and composure allowed Milan to keep their lead and weather the storm.

🧤 His best performance since returning.

The team then woke up and managed the game better but it was the Frenchman’s heroics that made sure certain positional errors went unpunished. Maignan started the season in great fashion before getting injured, but he seems to be fully fit now and ready for action.

Having the drop your starting centre-back pairing just before the game was never going to be pleasant for Pioli, especially after having already lost Kjaer, but Kalulu and Gabbia made the coach forget about the absentees as they put a really dominant performance at the back, excluding a couple of moments in the whole game.

Whilst Milan are in the market for a centre-back they can sure be happy with the depth and potential they have on the bench as the two youngsters did a fine job to help the team pick up all three points.

Olivier Giroud was out for several weeks but is now back and as hungry as ever. He managed to open the scoring through a penalty and then was at the heart of the second goal as he seized possession and his effort hit the post and went into the feet of Messias, who made no mistake.

It was a good game for the Frenchman as Pioli can breathe at last with both his main strikers being fit for the first time in a while. Zlatan also had a nice impact off the bench as he provided a lovely assist for Rafael Leao, though he unfortunately missed a penalty and failed to score at home for the first time since September.

Whilst Maignan picked up the MOTM award in our post-game ratings, for some Sandro Tonali was the best on the field and it’s hard to disagree. The youngster won the midfield battle and was great with his passing and positioning.

Despite the shaky performance of Rade Krunic who was adapted into a deeper role, Tonali still left Roma chasing the game with composure and brilliant reading of the game, neutralising their threat down the middle via Mkhitaryan, Zaniolo and Abraham too.

The confidence he is playing with is growing with every game as he is more assured and smart on the ball, knowing when to slow down the pace of the game and when to force the game forward. Another test passed with flying colours by the Italian.

5. Back on his board

What a relief it was for Pioli that most of his injured players are coming back in the new year, but Leao is probably one of the most important to come back especially since the Rossoneri have struggled going forward as of late.

The Portuguese started on the bench but was a complete game-changer after coming on in the second half. He managed to score a lovely goal, using his pace to leave the defenders for dead and he also got Mancini sent off, winning a penalty in the process.

The elegance with which he glides past players is so enjoyable to watch and the youngster looks determined to start the year off in fashion.