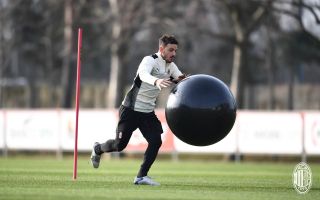 AC Milan will kick off the year of 2022 with a home game against Roma in which they will look to make it a league double over Jose Mourinho’s men.

According to MilanNews, the first selection issue that head coach Stefano Pioli is considering is the right-back position, where Roma loanee Alessandro Florenzi has the advantage over Davide Calabria who has recovered in time after the calf problem but it was one that kept him out for over a month so he is not yet at 100%.

Meanwhile, the source adds that Pioli did some tests in training to see what kind of starting line-up he will put out there, and a midfield double pivot of Sandro Tonali and Tiemoue Bakayoko was tried, with Ismael Bennacer and Franck Kessie at AFCON.

Finally, Zlatan Ibrahimovic will be the starter against one of his favourite opponents in Roma. The Swedish centre-forward has recovered from his knee discomfort, returning to training regularly.