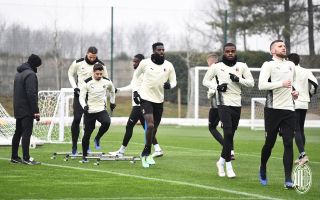 Sky: Pioli has one major selection doubt ahead of Roma game – the probable XI

Stefano Pioli has one major selection doubt to resolve ahead of the game against Roma on Thursday night, according to a report.

Journalist Peppe Di Stefano spoke to Sky (via MilanNews) and confirmed that the absences of Franck Kessie and Ismael Bennacer – who are at the African Cup of Nations with their respective national teams – means Pioli is studying the double pivot for his 4-2-3-1.

Sandro Tonali is obviously the one who is guaranteed of a spot, but there is a battle between Tiemoue Bakayoko and Rade Krunic for the other position. The duel is alive and both players have been tried in training to see who will be a better fit.

Meanwhile, the rest of the line-up is predicted to consist of Maignan in goal, Florenzi at right-back, Tomori and Romagnoli the centre-backs, Theo Hernandez at left-back, Junior Messias at right wing, Brahim Diaz as the playmaker, Alexis Saelemaekers on the left wing and Zlatan Ibrahimovic up front.