The list of AC Milan’s player salaries heading into the second half of the season has been published, as well as how much each squad member’s amortisation.

In terms of the amortisation numbers, it is the player’s transfer fee spread over the duration of their contract. That is why players like Fikayo Tomori (€7.125m per season), Theo Hernandez (€4.312m), Franck Kessie (€6.4m because of a two-year loan with obligation to buy), Rafael Leao (€5.909m) and Samu Castillejo (€4.240m) are top of the list.

Looking then at the list of salaries, the gross salary (stipendio lordo) is the figure that matters most since that’s what each player’s wages cost the club, when factoring in tax, whereas net (stipendio netto) is how much the player gets in their bank account.

The alarming number is that Alessio Romagnoli earns €10.175m gross per season and is the top earner by some distance. Then comes Zlatan Ibrahimovic at €917m, with Giroud, Rebic and Kessie all costing north of €4m, Calabria getting €3.7m gross after his renewal, Mike Maignan just below that. 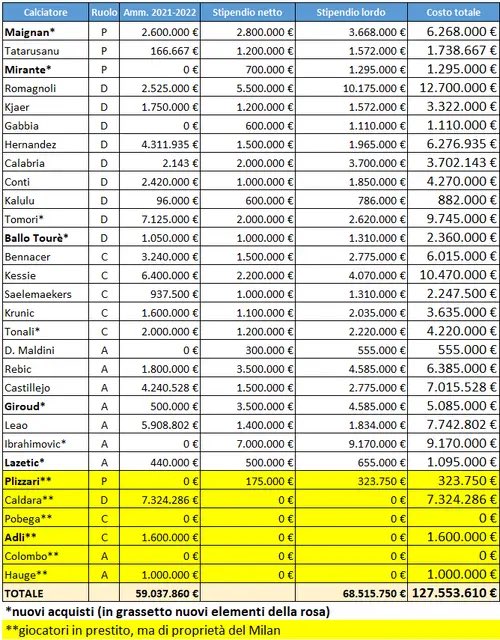