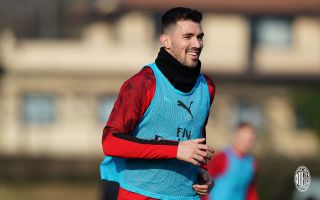 Reports: Milan and Romagnoli locked in renewal talks with offer on the table – the situation

AC Milan have made a renewal offer to Alessio Romagnoli but he is not yet convinced about accepting it, according to a report.

According to il Corriere dello Sport (via MilanNews), Romagnoli is reflecting on his future given that his agreement with Milan will expire on June 30th. There has been an offer on the table for a few weeks but it involves a pay cut to €3m net per season plus bonuses.

The captain is evaluating the Rossoneri’s proposal, but is looking around too hunting for opportunities. Given his deal expires in June he would be free to agree a pre-contract with another club at the beginning of 2022.

Tuttosport (via MilanNews) are more optimistic as they claim his signing could well arrive. The 26-year-old has expressed his desire to stay at Milan and knows that he will have to take a cut from his current €5.5m net per season salary, with negotiations continuing.

READ MORE: Sacchi reflects on Milan’s ‘extraordinary’ first half of the season and picks out ‘difficulties’