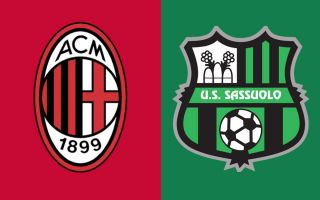 Unbeaten run and Ibra nears a milestone: All the key stats ahead of Milan vs. Sassuolo

AC Milan will be looking to avenge last weekend’s defeat against Fiorentina by returning to winning ways against Sassuolo at San Siro.

Milan are still struggling with some injuries as Olivier Giroud has been added to the injury list once again, whule Fikayo Tomori still isn’t ready despite reports suggesting that he would play from start, plus Ante Rebic and Davide Calabria are still sidelined.

You can read our preview here, while below are the best pre-match stats ahead of this afternoon’s kick-off…

➤ After going unbeaten for nine straight league games against Sassuolo (W7 D2), Milan lost their most recent game against the Neroverdi. The last time they suffered two consecutive defeats in this fixture was in 2015, with Filippo Inzaghi on the bench.

➤ Milan have won four home games against Sassuolo in Serie A (P8 D2 L2). Sassuolo won 2-1 when the sides last met at Milan in April.

➤ After their 3-4 defeat against Fiorentina, Milan could lose two consecutive Serie A games for the first time since last April. On that occasion the defeat at home came against Sassuolo, 1-2 with Giacomo Raspadori’s brace overturning the initial Calhanoglu’s goal.

➤ Since the beginning of May, Milan have won six of their eight Serie A home games (D2) and have kept five clean sheets. No team has kept more home clean sheets in this period.

➤ Sassuolo have lost three of their last five away league games (W1 D1), after a run of five consecutive away wins. In fact, the Neroverdi have suffered as many defeats in the last five as they have in the previous 10 Serie A away games (W6 D1).

➤ This fixture sees the only team that hasn’t lost any points from winning positions (Milan) come up against the one that has lost the most in the same situation (13 for Sassuolo, equal with Spezia).

➤ After his brace against Fiorentina, Zlatan Ibrahimovic is only two goals away from becoming the third player in the 2000s to score 300 goals in the Top Five European leagues. He’s currently on 298, behind Cristiano Ronaldo (480) and Messi (475). The Swede is also only one goal away from equalling Silvio Piola for the most goals in Serie A history after turning 38 years old (Piola scored 31 times).

➤ Giacomo Raspadori’s only brace in Serie A came at the San Siro against Milan last April, a game which he started from the bench. The Sassuolo’s striker hasn’t scored in 12 league games; he’s never gone 13 appearances in a row without scoring in the competition (12 also between August 2020 and January 2021).

READ MORE: Bakayoko to get the nod against Sassuolo – the midfielder’s hope in view of January