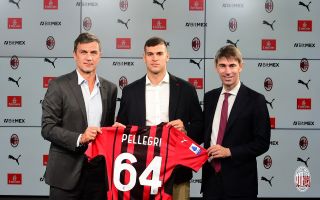 CorSport: Future of striker still to be deciphered but Milan have permanent signing in mind

Reports are continuing to emerge suggesting that AC Milan could bring forward the permanent signing of Pietro Pellegri from Monaco.

According to il Corriere dello Sport (via MilanNews), Pellegri’s future is still to be deciphered. There was a new meeting between the Milan management and his agent Giuseppe Riso at Casa Milan on Wednesday and various different hypotheses were discussed, given that the 21-year-old has barely played since joining on loan from Monaco.

Despite his struggles due to injury, the Roman newspaper reports that the Rossoneri are considering the idea of signing the Italy U21 international permanently from Monaco in the current transfer window, but at a lower amount than the €6m agreed in the summer.

Then they would him out on loan to another club in Serie A, so as to allow him to play with continuity and develop. Torino have shown some interest in Pellegri, as do Genoa.

READ MORE: Milan not giving up on Botman pursuit as waiting game could be key