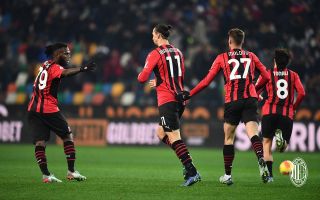 AC Milan were unable to extend their winning run in Serie A to three games but did at least avoid a fourth defeat in six matches in Saturday night’s 1-1 draw against Udinese.

As La Gazzetta dello Sport (via MilanNews) reports, it was Zlatan Ibrahimovic who saved Milan write when they needed him the most. Just like in the first leg of last season, the Swede scored in the same goal and with the same acrobatic move, but this time it was to salvage one point and not three.

Despite having 70% of ball possession against Udinese’s 30%, the Rossoneri ended the first half with zero shots on goal and were 1-0 down after a mistake that led to Beto netting. Pioli decided to react at the interval by bringing Tonali, Kessiè and Messias on for Bakayoko, Bennacer and Krunic.

The changes seemed to inject some more life into the attack but not any more composure. Despite Ibrahimovic’s great goal, Milan only brought home one point from Udine which is why Inter and Napoli are now looking to leapfrog. It was a bad game and not ideal preparation for the visit of Napoli next weekend.