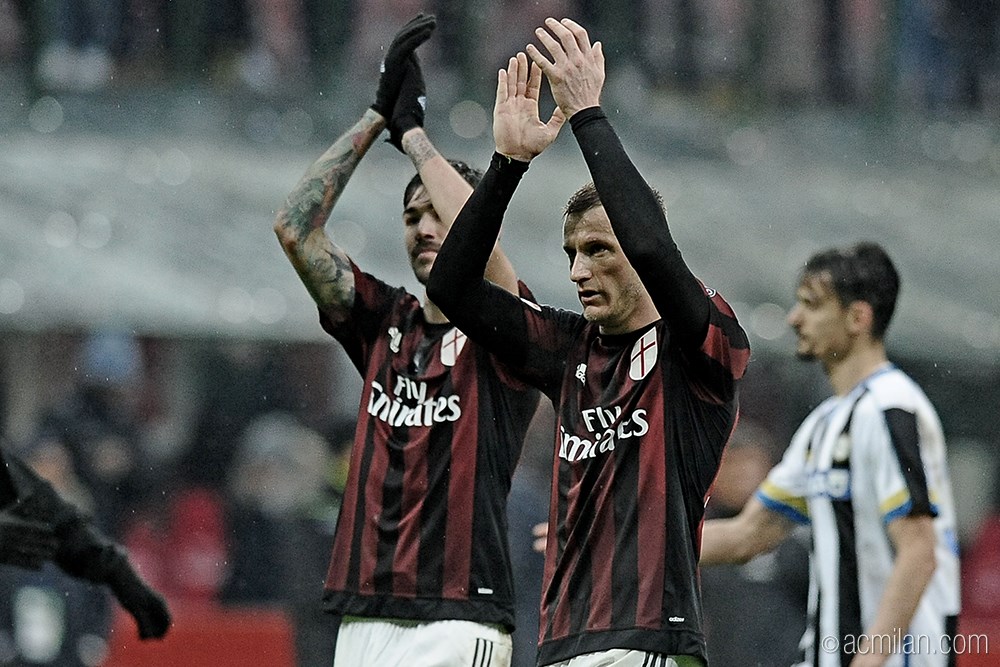 7 – Donnarumma (MOTM): Gigio made two great saves, both just before conceding Udinese’s goal, and the 16-year-old made a very crucial save to keep it at 1-0 seconds before Milan got the equalizer.

5 – Abate: The Italian right back had a decent performance making dangerous runs up the right flank and putting in a few good crosses. Though, Ignazio could do better at decision making and reactions.

6 – Alex: Though failing to stop Udinese from scoring the goal, the Brazilian veteran was pretty solid at the back and did well to keep the opposition away from goal.

6 – Romagnoli: The young centre-back showed confidence and strength throughout the match and made a number of great challenges to prevent Udinese from creating too many chances.

7 – Antonelli: Luca was again one of our most important players of the match running up and down the left flank creating chances up front and defending. He’s been causing problems for the opposition defence.

6 – Honda: The Japanese was a bit ineffective in the first half as opposed to the second half in which he created a few chances and made good plays.

5 – Montolivo: Another lacklustre performance by Il Capitano who barely showed any responsibility and confidence when attacking.

6 – Bertolacci: Andrea had a not so impressive first half making a few wrong passes but had a better second half and came close to scoring what could have probably been the winning goal.

5 – Kucka: The Slovakian engine, filling in on the left flack for Giacomo Bonaventura, showed that he was playing out of position. Juraj has been doing what he usually does while trying to the objectives of a winger which was difficult.

6 – Bacca: Carlos had a below average performance missing a few chances but the Colombian striker made an important assist to striking partner Niang to get the equaliser for the Rossoneri.

7 – Niang: Again, the young Frenchman made a few unnecessary and clumsy actions, but he bagged the equaliser and his 5th Serie A goal of the season.

5 – Balotelli: Super Mario was not so super as he hasn’t been able to make a big impact coming off the bench right after half time.

5 – Boateng: Prince came on in the second half to help out the attack in an attempt to score a second making a few good passes and shots on goal.

5 – Mihajlovic: Coach Sinisa’s substitutions looked questionable, though both Kucka and Niang went off due to slight physical issues. The Serbian decided not to bring on Jeremy Menez, who could have changed the game, for his long-awaited return.