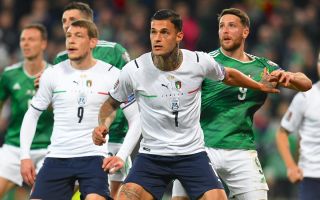 AC Milan remain interested in signing striker Gianluca Scamacca from Sassuolo but his valuation is beginning to skyrocket, a report claims.

After his strike against Milan from around 25 yards out, Scamacca scored another fantastic goal against Napoli on Wednesday to make it three consecutive Serie A matches scoring. Calciomercato.com writes that his big hope is for Italy coach Mancini to count on him in view of the play-offs to go to the World Cup in Qatar scheduled for March.

In terms of what his future holds, Inter remains a real possibility as their interest is strong and confirmed, but it seems difficult for him to leave in January because the asking price is €25m.In the past few hours Juventus spoke with the player’s entourage to get information on the current situation too.

However, in the background remain Milan who, in all likelihood, will say goodbye to Pietro Pellegri in June and will have to begin looking at a new striker for Stefano Pioli, and Scamacca is a profile the management like.

READ MORE: From Milenkovic to Luiz Felipe – Milan’s hunt for a new centre-back is underway