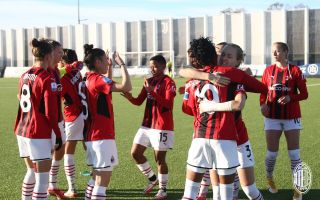 Preview: Hellas Verona vs. AC Milan Women – Background, prediction and how to watch

The AC Milan Women will take on Hellas Verona in the Coppa Italia today. The match will take place at 14:00 CET.

Milan are currently second in Group A on goal difference and they are looking to recover after a defeat against Juventus in which they were drawing 2-2 until the final 20 minutes but ended up losing 5-2. If they beat Verona today, they could top the group.

And they’ll have to do so with a huge weight on their backs, as the Rossonere will be without five of their best players. Christy Grimshaw and Laia Codina will be out due to injuries. Rimantė Jonušaitė will be out due to a knee injury. Valentina Giacinti is out due to tendon inflammations. And once again, Vero Boquete is not being summoned for unknown reasons.

The Rossonere will be up against it, but they have the mettle to pull this off. You’ll be able to watch the match on either AC Milan or Hellas Verona’s social media pages.