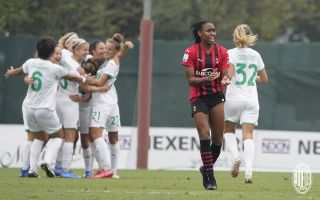 The AC Milan Women suffered their first league defeat on Saturday as they lost to Sassuolo 0-2.

Milan were pretty bad during the match, with a combination of poor defending, poor build-up play and poor passing. Here’s how the game went down…

Ganz made two changes to the side that started against Lazio: Grimshaw and Tucceri Ciminifor Jane and Thrige in the usual 3-4-2-1 formation. The decision to start Grimshaw was done to give Jane a rest after she had participated in the Aisha Buhari Cup. The game got off to a tense start and the Rossonere created an early chance through Vero who had a right-footed effort from outside the box. AC Milan would keep pushing forward and created a few chances from dead-ball situations.

However, it was Sassuolo who took the lead in the 15th minute through Kamila Dubcová, who rifled it home from 15 meters out. Poor marking would leave Dubcová unmarked inside the box, as both Agard and Fusetti were caught ball watching instead of marking the player.

The Rossonere tried to steady themselves and get an equaliser but the guests defended resolutely. AC Milan were given little time and space on the ball. Dubcova nearly had a second in the 31st minute but Giuliani tipped the ball into the post. Milan then tried to respond through Vero, who was denied by Lemey in the 34th minute. Giacinti had a chance at the end of the half but her effort was deflected just wide by defender Mana Mihashi.

The second half began, and the Rossonere came out from the break with renewed vigour. They nearly got the equalizer at the 49th minute through Giacinti. Sadly, her shot didn’t hit the back of the net. Nearly six minutes later, the guests would double their lead through Tamar Dongus scored from a corner. Once again, poor marking allowed Sassuolo to score. Tamar also happens to be the twin sister of Fabienne, who, if you recall, tormented Milan during their game against Hoffenheim.

It was a bitter pill for Milan to digest, and they had to swallow this virulent drink with no chaser. The Rossonere, however, would not be deterred, and they kept pushing for two equalisers. Nina Stapelfeldt, who was substituted in at the 60th-minute mark, would hit the post with a header in the 61st minute.

She then worked in tandem with Bergamaschi to lead a counter-attack, which culminated in Giacinti missing the target by a hair’s breadth. In the 79th minute, Vero would have another shot on target as she tested Lemey from a free-kick. Unfortunately, it did not go in. This was the final chance of the match and the Rossonere would end up losing the game 2-0.

They thus ended the match with their first league defeat of the season.

Unfortunately, there weren’t very many standouts for this match. Nearly everyone who wore red and black put on a bad performance.

The few that did fare better than the others were Refiloe Jane, whose second-half substitution made an immediate impact. And there was also Laia Codina, who did the best she could despite the circumstances she was in.

Her frustration at the first goal reflected the way most of the Milanisti felt after conceding.

This was yet another disappointing performance from Milan. The match was once again, proof that the Rossonere crumble under pressure from the big teams. If the opposition is well-organized and applies enough pressure, then Milan will succumb to them.

The game against Sassuolo was similar to the game against Hoffenheim, in that it was characterised by poor passing from Milan in the midfield and the team being dispossessed under the slightest bit of pressure.

There’s plenty of blame to go around, but Maurizio Ganz bears most of the responsibility here. His poor preparation and poor tactics are what led to the team’s loss.

A full autopsy of the game will be posted later on. In the meanwhile, the Rossonere will have to pick themselves off the ground and turn their attention towards Napoli.

The AC Milan Women will play Napoli on Sunday, October 3rd. Kickoff time will be at 12:30 CEST. Look for them to make up for their loss against the league’s bottom dwellers and to score more goals than they did during this fixture.