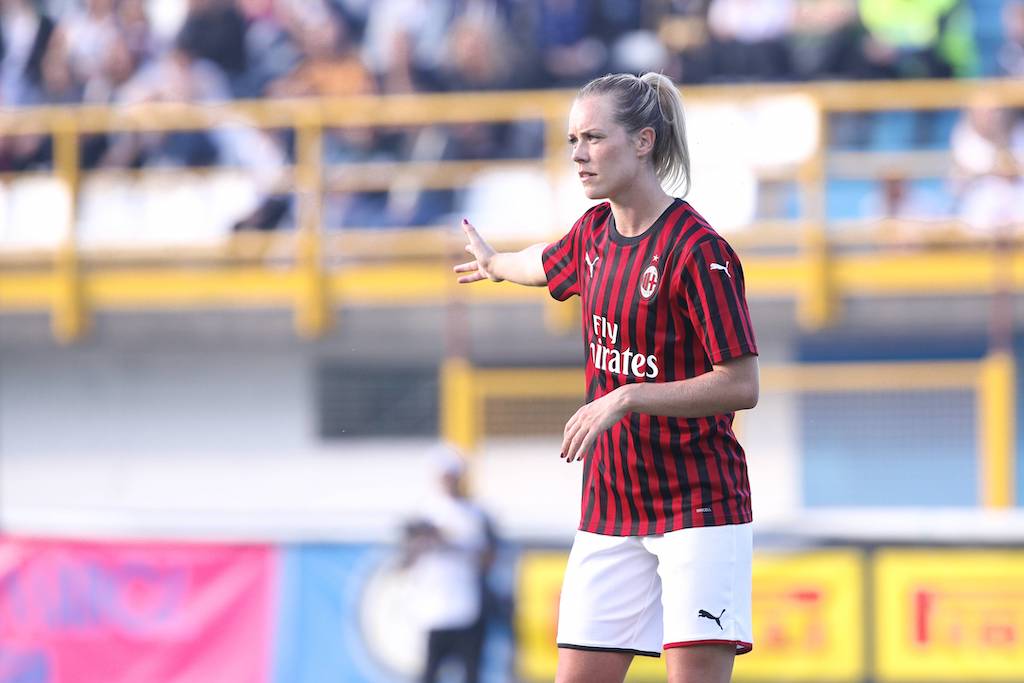 Milan Women’s star Hovland being eyed by PSG; the Rossonere’s open letter to the fans

AC Milan Femminile defender, Stine Hovland, might leave the team this summer. According to L’Équipière, the Rossonere centre-back is being eyed by PSG.

The Parisian side are looking to strengthen their backline by adding her as a backup to their starting trio of defenders.

While Hovland might not start every game at PSG, there are other benefits to playing for the team. For starters, if she were to join them, she’d be paid a higher salary. The current salary limit for amateur players in Italy is €30,000 a year, plus bonuses. France boasts some of the highest-paid women’s players in the world, most of whom play for PSG’s rivals, Olympique Lyonnais. While Hovland might not make as much money as Amandine Henry does, she’ll certainly be paid more than she currently is in Italy.

There’s also the prospect of playing in the Champions League and the visibility that would be gained by playing alongside Christiane Endler, one of the world’s best goalkeepers.

Furthermore, Division 1 Féminine is also a professional league. Professionalism comes with certain benefits, such as binding contracts and pensions.

It should be noted that AC Milan pays pensions for their women’s team, but the amount of money she’d receive in benefits would be more in France than in Italy since French teams are allowed to spend more money on their women’s teams.

Hovland would be one of eleven players who will leave the squad. It’s been confirmed that midfielder Nora Heroum will leave the Rossonere as well. Her next destination will most likely be a team in England (Il Calcio Femminile).

In addition to this, Pamela Begič and Francesca Zanzi have already confirmed their departures. Midfielder Marta Carissmi also announced her retirement from football earlier today.

The outgoing players will need to be replaced and Milan has a few players in mind for them.

There is a chance that the team could convince Hovland to stay, and it would rest on the fact that she would have more playing time here. The argument could be based on sentiment as well. An example of this is from defender Francesca Vitale, who is said to have rebuffed other teams to remain with Milan due to the great affection she’s received from the fans.

One would hope that a similar argument would sway Hovland to stay with the team. Her final decision on the matter will be known in a few days’ time.

The Rossonere’s letter to the fans

On June 24th, the AC Milan Women released a joint letter that they had written to their fans. In the letter, they expressed their disappointment over the Serie A Femminile season being canceled. However, rather than dwelling on disappointment, they also said that they would use this to motivate them for next season.

“We would have liked to take to the field to accomplish our goals, to make AC Milan a key player on the Italian and the European stage. We worked hard to honour our shirt, no matter what.”

“We missed the qualification for the UCL due to an algorithm, a verdict that disappointed us, but we promise that it will be the lever to return stronger and more focused than ever. From the second week of July we will be back at the Vismara Sports Center to train at best in view of the first match of the new championship, scheduled for August 22, 2020.”

Once Milan takes the field again in mid-July they’ll no doubt, have a new look to them. The hope is they’ll find the right balance between the players and become a cohesive and formidable unit.

Serie A Femminile’s next season will start on August 22nd. After enduring yet another summer of upheaval, time will tell if Milan are able to adjust to all the changes that have happened to them.

We’ll also see if they’re able to do one better and to meet their main objective, which is to make a run for the Scudetto and to qualify for next season’s edition of the Champions League.