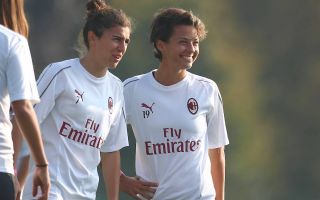 The 2021-22 season is underway for the AC Milan Women as they go on the hunt for silverware domestically after coming so close in the last campaign.

Valentina Giacinti reached a milestone during the first match against Hellas Verona. Valentina scored fifty goals in Serie A Femminile for Milan. She is the first Milan player to reach this milestone.

Similarly, Valentina Bergamaschi reached her own milestone against Verona. The player has played a total of fifty matches for the Rossonere and she also capped off her performance by scoring the team’s second goal of the match.

Two players from Milan’s youth squad have been called up to the national team. Giulia Semplici and Elisa Dal Brun have both received call-ups to Italy’s U19 squad. The players have been summoned for the Azzurrine’s dual friendlies against Austria.

The Rossonere’s youth squad will also play their first match in the Campionato Primavera against Sampdoria on September 26th. The AC Milan Women will play Sampdoria this Saturday. Kickoff time will be 17:30 CET.

The FIGC is working on securing broadcasting rights for Serie A Femminile, so there’s no guarantee of how to watch the game live outside of Italy at the moment. The only certain thing is that you’ll be able to watch the match on the team’s Dailymotion page afterward.

READ MORE: Laia Codina reflects on time at AC Milan Women so far – “I feel like I’ve been here for a lifetime”