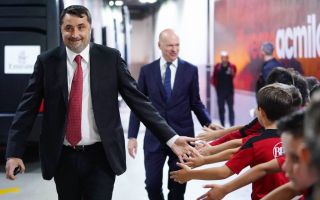 Former AC Milan sporting director Massimiliano Mirabelli has praised the club for the signing of Sandro Tonali from Brescia.

Now, Mirabelli has spoken to TMW (via MilanLive) about the current state of the Rossoneri, starting with Tonali.

A betting calculator would have shown that Inter were by far the favourites up until around a week ago, but Paolo Maldini and Ricky Massara made a decisive swoop to land the 20-year-old, who is already an Italy international and could form the bedrock of the midfield for years to come.

Mirabelli congratulated the Rossoneri management on such a scalp.

“A great signing, Tonali is a strong, a young player with potential. AC Milan have done well to invest in talents for the future,” he said.

“Inter? More than anything else they have chosen to focus on different players.”

Three years ago Mirabelli was faced with the seemingly impossible task of sitting down with Mino Raiola to try and agree a renewal for Gianluigi Donnarumma, with Raiola at that point determined to take him to another club.

Now, Milan must face the dilemma once again. Donnarumma’s current contract runs until June 2021, meaning that the club risk letting his deal run into the final few months unless they move quickly to try and secure his future.

“Right from the start we had many contracts to renew. We took them all to port, including Gigio’s,” Mirabelli said.

Mirabelli has previously commented on just how much Donnarumma is worth to the Rossoneri.

“I am convinced that Milan and Donnarumma will make every effort to continue together along a path that will be paved with successes,” he said last month.

“I say he’s worth 100 million and I’m not exaggerating. I am happy that it was me, three years ago, who convinced him to stay with the Rossoneri. Let’s say that this was the best gift I could have given to Milan.”