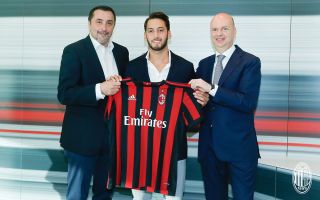 Former AC Milan director Massimiliano Mirabelli has revealed that he could not stop himself from laughing when he heard Inter are signing Hakan Calhanoglu.

A number of sources, including Sky, are reporting that Calhanoglu is set to join city rivals Inter on a free transfer. The Turkey international will undergo a medical today before putting pen to paper on a three-year deal worth €5m net per season plus bonuses, which is a better offer than what the Rossoneri were willing to table.

The 27-year-old has regularly been linked with teams such as Juventus and Atletico Madrid, but it seems that he is now set to make his way across the Navigli. Calhanoglu scored 4 goals and added 10 assists for Milan this season but was largely inconsistent, just as he has been for the entirety of his four-year spell.

Mirabelli, the former Milan sporting director, gave an interview to Tuttosport and was asked about Calhanoglu, who is set to leave the Rossoneri and cross the city divide.

“I started laughing. I’ll explain to you: the Nerazzurri know the player very well. When I worked for the Nerazzurri, we were already following him, he was on our radar,” he said (via PianetaMilan).

On why it did not go through before, ehe added: “There was the situation of Financial Fair Play. It was not easy to operate on the market, with so many stakes to take into account.

“I’m sorry that Milan lose a great player and above all that he will go for free. The Rossoneri club will not collect anything. But I’m happy that he ends up in the Nerazzurri: he is a really important player.

“He is a real player. Maybe he gives his best as an attacking midfielder. But in Germany he covered various midfield roles. He is a footballer with not indifferent ballistic prowess, who assists his teammates, but above all he runs a lot to be useful in both phases, defensive and offensive. And it’s not easy to have his clarity in the last step.

“For the Nerazzurri it is a great deal. Inter will have fun with Calhanoglu. While Milan will regret it. The real problem is the strategy adopted by the Devil. When I was at Milan, I had to solve many problems related to contract renewals, including that of Gigio Donnarumma. The Rossoneri, with Gigio and Calhanoglu gone to zero, lose 150 million euros in assets. If everyone is happy, that’s fine.

“Inter will be happier to take the Turkish player. Anyway, I don’t remember such important treaties in June. They are business to be closed much earlier. The more time passes, the more problems increase. The next problem I think could be Franck Kessié.”

READ MORE: Ziyech not the only name as another Chelsea midfielder is of interest to Milan