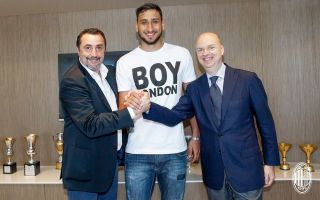 Massimiliano Mirabelli has urged AC Milan to boycott agent Mino Raiola if Gianluigi Donnarumma does not renew, and revealed some interesting background on the 2017 saga.

Mirabelli was Milan’s sporting director for one season and has claimed that he is the only person to beat the super agent Raiola after the controversy surrounding the Milan goalkeeper with his agent pushing for a move away.

It was back in 2017 when – despite rumours of Raiola and Donnarumma splitting plus some bizarre social media activity from the pair – Gigio eventually penned a new deal to stay at the club.

Now, four years on, a similar soap opera is unfolding in which the future of the Italy international has not yet been resolved with less than 100 days until the expiry of his contract.

Mirabelli spoke during an interview with Libero about the situation, revealing his disbelief that it has been allowed to unfold this way and giving some background on what happened four years ago.

“If Donnarumma does not renew, Milan must boycott Raiola. I don’t understand how Milan got to this situation. The times are wrong, it’s absurd to negotiate now,” he said (via TMW).

“The contract should have been renewed two seasons ago, it’s the ABC of football. The Rossoneri made a serious mistake. When I renewed Gigio, I took care of the negotiation down to the smallest detail.

“The goalkeeper published posts on social media and shortly afterwards they were removed. Why? Simple, Raiola made him write them, I made him delete them. The decisive moment of the negotiation was the final act. We were with Gigio, his family and his agents. Raiola gets up and says: ‘Don’t sign, we’re leaving’. As soon as the managers leave, Gigio takes the ballpoint pen and extends the contract. Without Mino’s presence.”

Mirabelli has an idea to solve the Donnarumma saga: “Raiola was good, he has already won by coming to this situation. He has the knife on the side of the handle, but if I were at Milan I would put his back against the wall.

“I would give him a nice speech, telling him that Gigio is an untouchable capital. Either he renews or Milan will no longer have Mino Raiola players in the squad. It takes courage, but in this situation it is the only way. And Milan must be respected.”