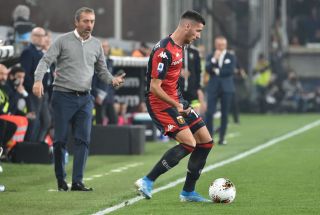 AC Milan could try and acquire a full-back from Genoa in an exchange deal involving forgotten man Diego Laxalt, according to a report.

MilanLive note that Laxalt has not played a single minute in the league since returning from his loan spell at Torino in January, amassing only 16 minutes with that coming in the Coppa Italia semi-final first leg against Juventus.

Therefore, an opportunity could very easily present itself, and it could involve a club that Milan have dealt with extensively in Genoa.

The track could reopen for the Uruguay international to return to the Grifone and – because of the excellent relations between the two clubs – Milan could acquire Paolo Ghiglione in return.

The 23-year-old has one goal and five assists in 22 appearances across all competitions this season and has stood out in a Genoa side that have once again struggled for consistency.