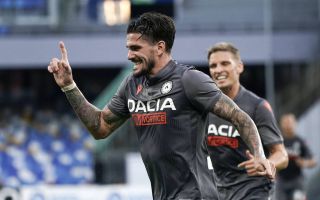 AC Milan have reignited their interest in Udinese star Rodrigo De Paul and could make a concrete offer to sign him shortly, a report claims.

The Rossoneri have been strongly linked with more for the Argentine for the past few transfer windows now without ever getting a deal over the line.

The links seemed to fade in line with speculation that Ralf Rangnick will arrive as the new manager, but that has now been officially squashed, and interestingly intermediary Edoardo Crnjar was spotted Casa Milan on Monday afternoon – with De Paul a client of his.

According to MilanLive, the permanence of Stefano Pioli will inevitably change the transfer market of Milan, and De Paul is a player widely appreciated by the current management.

In January there were ongoing talks at Casa Milan between the Rossoneri management and the entourage of the playmaker, and now in the coming days there may be new talks.

Udinese are ready to sell but at the right offer, with a price tag of €30m set after a season in which he has scored seven goals and added five assists in 30 league appearances.