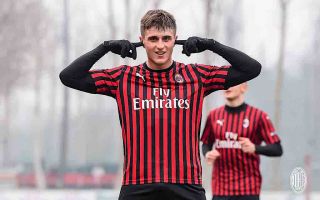 ML: Pioli ready to give Primavera star a chance to shine in Ibrahimovic’s absence

Milan will find themselves without an out-and-out number nine when the season resumes next month as Ibrahimovic is set to miss 4-5 weeks with a calf problem. Rafael Leao and Ante Rebic are seen as support strikers, but neither is a true centre-forward.

Pioli is evaluating every hypothesis and could choose to play with a 4-2-3-1 in order to let Leao show he can lead the line, or possibly with a 4-4-2 to put Ante Rebic next to the Portuguese starlet.

However, the best solution could be internal. According to MilanLive, Pioli is thinking of giving Colombo – the young striker from the Primavera – an opportunity in the next few games.

This is why it cannot be excluded that Pioli uses him and Daniel Maldini when the season resumes, even if the latter is viewed as more of a playmaker.