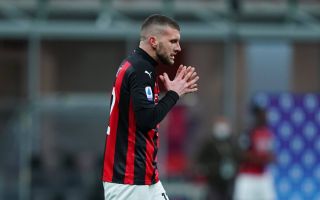 ML: Rebic could receive a two-game ban after foolish red card vs. Napoli

Ante Rebic was back in the squad for Milan’s clash against Napoli this evening, having recovered from his hip injury just in time for the big game. However, instead of being a hero off the bench, he ruined everything.

The Croatian was brought on after 60 minutes in the second half, with Stefano Pioli looking for a reaction in attack. He got a reaction alright, but not the one he was hoping for as the former Frankfurt man was sent off.

In the final minutes of the game, after referee Fabrizio Pasqua gave a foul against Rebic, the latter couldn’t hold his emotions back and said something to the referee. The result, a straight red card and even more trouble for Milan.

As pointed out by MilanLive, since it was a straight red, Rebic could be handed a two-game ban. A lot will depend on the referee’s report on the incident and what the winger said, as it could also be more than two games. Foolish indeed.