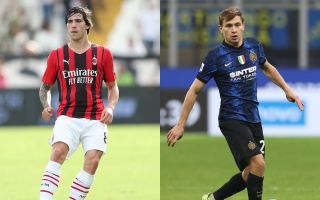 ML: Tonali and the derby battle with Barella – from Scudetto race to World Cup

The derby will contain many interesting battles on the pitch, such as Zlatan Ibrahimovic vs. Edin Dzeko and Sandro Tonali vs. Nicolo Barella. The latter will be exciting to follow, given the talent of the two.

As highlighted by MilanLive, the battle between Tonali and Barella could be decisive for the outcome of the game. The midfield battle, as we know, is always important and the performances of these two will matter a lot.

It’s an all-Italian battle between two midfielders that have started the season very well, showing that they are the future of the national team as well. In addition to helping their respective team, eyes are inevitable on the World Cup next year as well.

Barella has cemented his spot in the national team, pretty much, while Tonali is ready to leave the U21 side and join the first team. But tonight, the focus will be on the derby and Roberto Mancini will surely be present to watch.