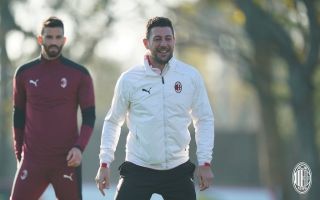 MN: A live video system, drones and programs – how Pioli is leading Milan from home

AC Milan will be without their head coach for this weekend’s upcoming trip to face Napoli, but Stefano Pioli has the matter under control.

Both Pioli and his assistant Giacomo Murelli have tested positive for Coronvirus, meaning neither will be able to make the trip south to Naples for what is a crucial clash between two early-season high-flyers.

As reported by MilanNews, Pioli will most likely also miss against Lille, another game at a crucial moment of the season because after the restart following the international break Milan will have 10 games in 30 days (7 in the league and 3 in Europe).

First team coach Daniele Bonera has been chosen by Milan as a substitute for Pioli and Murelli, and the former Rossoneri defender obtained his UEFA Pro coaching license in September and therefore can sit on the bench in Naples.

Bonera – thanks to the technological support provided by the club to get directions from Pioli – will be assisted in preparing for the trip to the San Paolo by a live video system, the use of drones and specific programs.

This means Pioli should always have the situation under control from his domestic isolation, but for Bonera however it will be a complicated debut against his friend and former team-mate Gattuso.