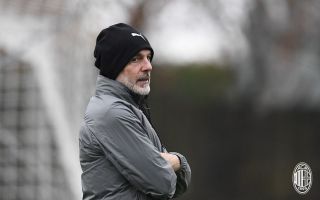 The news regarding team selection up until now has been that Stefano Pioli has plenty of doubts about the line-up he will field against Atletico Madrid tomorrow night.

According to MilanNews, Ciprian Tatarusanu will be the man in goal again with Mike Maignan aiming to recover for Sunday night’s game against Sassuolo. Fikayo Tomori has not recovered but Alessio Romagnoli returns and will partner Simon Kjaer, with Theo Hernandez at left-back and Pierre Kalulu currently expected to start of Alessandro Florenzi at right-back.

Pioli will once again rely on the double pivot of Franck Kessie and Sandro Tonali, even if there is also the possibility that Ismael Bennacer will play instead of the Italian, with Tiemoue Bakayoko also ready to come on during the game if fresh legs are needed.

In attack Alexis Saelemaekers will be on the right wing and Brahim Diaz down the middle. Rafael Leao came off against Fiorentina with cramps and is not in top form so may not start from the beginning, with Rade Krunic ready if he doesn’t.